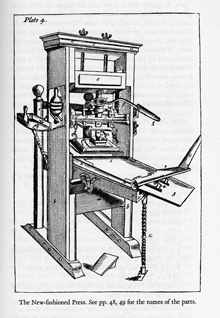 A friend send me a link to the Design Police, where you can download cut-out labels that can be stuck onto offending examples of bad typography and design. The very first of the stickers, all of which are stark white on red, says, “Kern this!” with a pointing arrow. Among the noteworthy stickers are: “Hierarchy required”; “Track this!”; “Display font unreadable as body copy”; “Please reduce line length immediately”; “Do not use faux italic”; and the ever-popular “Comic Sans is illegal.” (Sorry, Vinnie.) I particularly like “Caution: rivers,” which really does sound like a warning sign.

A couple of them have more to do with content than with graphic design, though they’re good advice: “Get your tone of voice right” and “Hire a copywriter.” And the huge, stark “WIDOW” could easily be applied too freely; there are worse things than widows on a page. My personal favorite, though, must be: “Microsoft Word™ is not a design tool.”

Well, all right, anything can be a design tool, in the right hands. But still.

Seattle’s street signs have recently been undergoing a change. While they’re still the same recognizable freeway-green rectangles, outlined in white and with white letters reversed out of the green, the new signs have noticeably larger type. The old signs (top, left) were always easily legible – upper and lowercase letters, except in secondary information such as “AVE,” and always spaced loosely enough to be readable at an angle from a moving car – though a lot of the old signs are now too faded to do their job. (I had to search a bit to find an example of old signs that were still in good condition.) Even the numerals were legible, an important consideration in a city with lots of numbered streets.

The new street signs (bottom, left) aren’t obviously different, except that the letters are larger. They take up more of the space inside the green rectangle, which creates a less pleasing shape but make them readable from a greater distance away. They look a bit bloated when you see them from the sidewalk, as you walk along a city street; but from a moving car, they’re large and clear. Clearly that was the priority in their design.

Some of the small details are fussier in the new signs. It might seem better to have “Ave” in upper and lowercase letters, like the street name, since it’s more legible than the old all-caps setting; but this is purely secondary information, so it’s actually a distraction. Similarly, the gratuitous addition of superscripts such as “th” on “10th Ave E” just clutters things up. The simpler the form, the better, as long as the essential information is there.

In case you’re wondering, the arrows in the bottom photo are there simply because I took that picture at a peculiar intersection where streets come together at an angle. 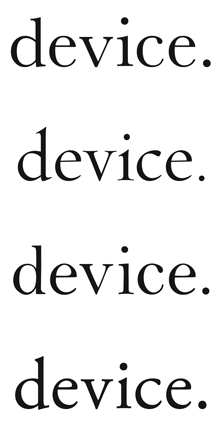 Wearing your art on your sleeve

Bruce Sterling just noted Shelley Jackson’s “Skin Project,” the 2,095-word short story being published in an “edition of one” by being tattooed, one word at a time, on the bodies of 2,095 different people. Although I’ve never met Shelley Jackson, I’ve participated indirectly in this project: in November 2006, I provided typographic assistance to editor Ellen Datlow and writer/editor Kelly Link, who were in Austin, Texas, for the World Fantasy Convention and who were both about to get tattoos as part of this project. Each of them had a single word to be turned into a tattoo: for Kelly, “skin”; for Ellen, “device.” (including the final period).

I gave them several choices of typeface, based on what they told me they’d like and on what I thought would work in a tattoo. (Admittedly, this was a brand new production consideration for me.) The four typefaces I tried out were Monotype Baskerville, Requiem, Monotype Bell, and Adobe Garamond. Ellen picked Monotype Bell; I don’t recall which typeface Kelly chose.

Early stages of this project were shown in Ina Saltz’s book Body type, a collection of photographs of tattoos that involve words, but the “Skin Project” was far from done when Ina’s book went to press. (In fact, it was on the shelf in Austin’s excellent bookstore Book People when Kelly went there to do a reading during the convention.)

Which typefaces got used, ultimately? Ellen picked Monotype Bell (third one down in the image at left). I don’t recall which one Kelly ended up choosing.

I’ve been reading Ken MacLeod’s 1996 novel The Stone Canal, in its 2000 U.S. edition (actually its 2001 mass-market paperback edition, published by Tor). The book’s enjoyable and well written, but what struck me was the editing. Ken MacLeod is a Scottish writer, and his books have been published first in the United Kingdom, then republished in the United States. I know that the U.S. editions have been given an editorial once-over to “Americanize” the language; it’s a common practice, at least in popular-genre writing, though it’s one that I dislike and that I feel shows a fundamental lack of respect for our shared language. (Do American publishers “Americanize” the prose of Kingsley Amis, Doris Lessing, Patrick White, Rebecca West, Evelyn Waugh?)

There was one point where the prose of Ken MacLeod’s novel had not been Americanized, and I suspect it was a slip on the part of the copyeditor: a reference to a husband getting someone’s address out of his wife’s “diary.” In the UK, a diary might be nothing more personal than an appointment calendar – my own annual calendar is a hardbound datebook called A4 architects & designers diary – but in the US a diary is something a great deal more personal: one’s intimate daily thoughts, recorded privately in a handwritten book for no one’s eyes but our own. (Or published far and wide on Livejournal; it depends on the diarist’s sense of privacy.) The American sense of “diary” gave that brief sentence an emotional weight that it was clear MacLeod didn’t intend; figuring that out took me out of the story and broke my concentration for a moment, which was not what was called for at that point in the novel. Tinkering with a writer’s prose is risky; but smoothing it out and then missing something gives whatever you’ve missed more importance than it warrants.

Whoever copyedited this book also had a habit of combining “on” and “to” into “onto” profligately, without apparently stopping to think about whether they really did belong together. They don’t always; and the same may be said of “in” and “to” vs. “into.” If you drive down the street and turn in to the police station, you haven’t suddenly metamorphosed into a police station; you’ve simply entered its parking lot. By the same token, moving on to the next subject is not the same as moving onto the next subject. (Ouch!) I have no idea whether this thoughtless glitch was introduced in the U.S. edition or the original British edition, but either way, its results were distracting. Editing can never be done automatically.

I enjoyed the book, though.