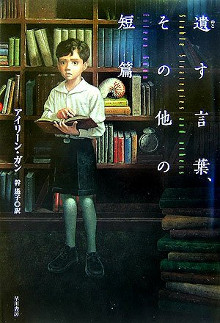 A Sense of Gender

While we were in Japan, Eileen’s book won the Sense of Gender Award, in the category of works in translation. It’s an award to “celebrate works that invite us to reconsider gender in various fields, including literature, movies, and manga”; it was established in 2001 by Mari Kotani, Reona Kashiwazaki, and Noriko Maki, for the Japanese Association of Feminist Science Fiction and Fantasy. There was an amusing, thoughtful awards ceremony on Sunday, Sept. 2, at the World Science Fiction Convention in Yokohama, and Eileen came away with a handsome little crystal trophy and a great big smile.

That’s why we were in Japan at such a hot, humid time of year: because the convention was then. Eileen’s collection of short stories, Stable Strategies for Middle Management, which I had designed and produced for Tachyon Publications in San Francisco, had been translated into Japanese as 遺す言葉、その他の短編 and published last year in Japan by Hayakawa Publishing. The Hayakawa edition owes nothing to my design, but it’s a handsome volume in its own right: a well-made hardcover (complete with silk ribbon!), intelligently and allusively illustrated both inside and out, and as far as I can judge well designed typographically. The title story of the Japanese edition is “Coming to Terms,” which had been recently published in Hayakawa’s SF Magazine, rather than “Stable Strategies for Middle Management,” the title story of the U.S. edition. “Coming to Terms” is a title that doesn’t lend itself easily to translation, though; the Japanese title for the story seems to be closer to something like “Testament,” which is also multivalent and appropriate to the story.