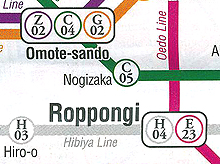 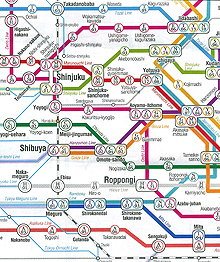 I kept trying to decide whether Tokyo’s subway system was easier or harder to find your way around than those of other major world cities. I once wrote a “dot-font” column about riding underground trains in London, Paris, and New York, all in a single month, and judging which city’s system made it easiest to tell where you were as the train pulled into the station. (London won, hands down.) How does Tokyo stack up against these three?

Hard to be sure, since in Tokyo I’ve got the added disadvantage of not reading Japanese (or not enough to be useful), so I’m forced to rely on the bits that are in English (or at least in romaji, letters of the Latin alphabet). That’s a handicap that a native Japanese-speaker wouldn’t have. The Tokyo Metro system – along with the Japanese rail system and the signage on major highways – is pretty good about including place names in English, for the benefit of Americans and other visiting foreigners; instructions and directions are a bit more haphazard. And my local informants were quick to assure me that the Tokyo ticket-vending machines, whether in English or Japanese, were confusing and poorly designed: “Bad interface,” muttered one, in a resigned tone.

To be sure, the Tokyo subway system is the largest and most complex in the world. But that seems to demand an even clearer, more rigorously thought-out design. Why, for instance, did there appear to be no standard, accepted map of the subways, like the famous schematic of the London Underground? I saw every kind of map, without standardization; the worst one looked like a many-colored bowl of noodles. Granted, it’s hard to keep the map visually simple when every piece of written information has to be presented twice, in two radically different writing systems; but it can be done. And color-coding, which is used extensively, seems inadequate when you’re trying to differentiate more than a dozen different lines. (One useful innovation, which I saw on some newer maps, was to label each station by its line and number: i.e., a letter to identify the line, and a number to show where that station falls along that particular line. Any station that serves as a junction between lines will have more than one designation; for example, Roppongi station is designated both H 04 – fourth station on the Hibiya line – and E 23 – twenty-third station on the Oedo line.)

Complicating matters in the Tokyo metropolitan area is that the system comprises not just the Metro itself but also an extensive network of local trains – and both of these include not just the public routes but several private lines as well. It’s not difficult – just complicated – to show all these lines on a map; but it can get very tricky trying to find your way around within a complex station, such as Shibuya, to transfer from one line to another. And in Yokohama – which is not technically part of the Tokyo metropolitan area but is enmeshed on many levels with Tokyo’s transit system – I found it impossible to buy a complete ticket for the two-part ride from our hotel to the Pacifico conference center in Minato Mirai; every time, no matter how I did it, I found myself having to top up my ticket at the other end, in order to pay the proper fare and be allowed to exit.

Tokyo’s transit system is obviously extensive and very useful. I just suspect that the locals in Tokyo take much the same pride that New Yorkers do in knowing the peculiarities of their subways. If you know the illogical but necessary shortcut that gets you across town efficiently while others flounder, it makes you feel good; you’re in the know. As a visitor, I wasn’t in the know, but I benefited many times from the helpful knowledge of locals, who often went out of their way to make sure that I got where I was going.

The noodle-bowl map must be among the bits of paper I got rid of before packing for the trip home, but here are a few links to some of the many existing maps of the Tokyo Metro – a bewildering variety: