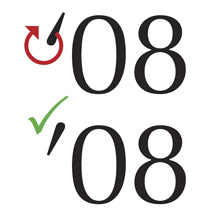 There’s a wonderful photo on SFGate today, in a set of images from the just-completed Republican National Convention. It’s a shot of a couple of stagehands carrying a big sign down to the floor of the auditorium, in preparation for the event. The sign consists of giant Optima letters stuck to a ladder-like frame; the cap-height is about half the height of one of the guys carrying it. Naturally, the phrase spelled out so grandly is “McCAIN ’08” – except that the apostrophe (which is about the length of the guy’s head) is backwards.

There’s something peculiarly wonderful about a typographic error that has its origins in automated typesetting (“smart quotes”) being embodied in such a large, hands-on, physical form and lugged down the stairs to be erected in front of a huge crowd in a convention hall.