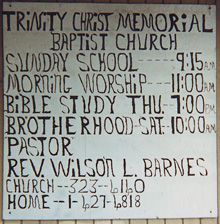 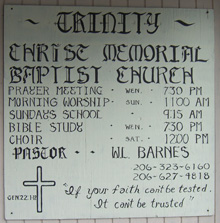 Everybody loves “vernacular typography,” or at least enjoys finding examples. This purely functional sign resides on a store-front church in a neighborhood in Seattle (not far, in fact, from the building with the faded “Roycroft Theater” sign that I noted last year). For several years, the church sign was characterized by the shaky lettering in the top image; I was never sure whether it was a deliberate style or the result of being painted by someone with a nerve problem. (Whatever the intention or the skill involved, presumably it served its purpose; the information was there, albeit in a rather peculiar form.)

More recently, that sign was replaced by the one in the bottom image – same information, mostly, but a more controlled sort of lettering, or at least a more formal set of models. Still not anything that would be mistaken for the work of a professional sign-painter.