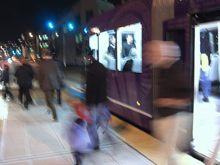 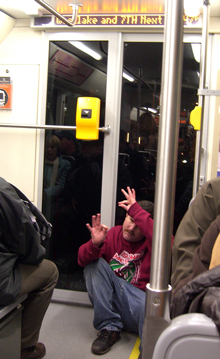 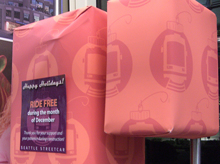 Last December, Seattle’s new streetcar débuted, connecting downtown with the rapidly developing South Lake Union. This tram, like the development of South Lake Union itself, was the brainchild of Paul Allen, Microsoft co-founder. It was a cold winter day when the service began, but I managed to get there in time to ride the streetcar on the evening of its first day. I may also have seen the new streetcar line’s first drunk – an amiable drunk, to be sure, who was gently ushered off the car at a convenient stop.

The line is quite simple – there and back again – but I was curious to see how the informational signage would be handled. It seems pretty good at letting you know where you are, and the stops on the street are fairly well marked.

The fare boxes were covered with a decorative paper wrapping, because for the first month everyone got to ride for free. Presumably now the fare boxes are in operation; I’ll have to go back downtown and see.