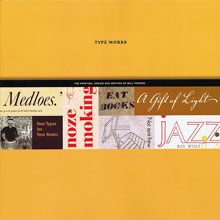 When Will Powers died suddenly two years ago, he left a gaping hole in the community of typographers, printers, and book-designers in this country. Now we have a small book to remind us of the work that he left behind: Type Works: the printing, design and writing of Will Powers.

It’s small in extent (50 pages) but not in format: its pages are a generous nine inches square, as befits a book that’s got to show a lot of examples of the design of other books. Oddly, there’s no one named as author or editor, which will perplex book dealers and annoy librarians; it’s simply credited to Interval Press, Birchwood, Minnesota. My copy was sent to me by Cheryl Miller, Will’s wife, and the copyright is in her name. (The information page on the distributor’s website confirms that Cheryl is the book’s editor.)

This collection of essays and reminiscences by Will’s many friends and collaborators gives a kaleidoscopic picture of the man. Although by the time I first met him, he was living and working in Minneapolis, as design and production manager for the Minnesota Historical Society Press, Will had spent many years in the San Francisco Bay Area as a letterpress printer. He and Wesley Tanner printed Fine Print for several years, and Will also wrote articles and designed covers for that remarkable publication. Reading about those times now, with names of people I came to know many years later, makes me imagine an alternate history in which, when I was living in San Francisco after I got out of college in 1971, I had somehow made contact with the local printing community. But at that young age I had no idea that typography was going to be central to my life, and I didn’t meet any of those people, or stay in the Bay Area.

Type Works is a short-run book, printed by BookMobile in Minneapolis, who specialize in short-run and print-on-demand books (and who I know from experience can do a good job of it). Given the display purpose of this book, I could wish that it had a sewn binding that would lie perfectly flat, but that’s not an option in this short a run, unless you manufacture the book by hand. I also wish I could read every word on every printed example shown, but that’s just a reflection of how fascinating the texts that Will worked on (or wrote) tended to be. This is a fine presentation of examples of Will Powers’s excellent typography and book design, of the words written about him, and of a few of his own words as well. And I love the fact that the text uses Zuzana Licko’s typeface Journal, an idiosyncratic but very readable text face of the digital era.

TypeCon 2011 – the first one run by SOTA on an all-volunteer basis – seemed to be a successful conference, and it was held in a fascinating city: New Orleans. The single-track program was well designed to engender conversation; in fact, individual presentations seemed to be speaking back and forth to each other, even when they had not be planned with that in mind. A lot of that conversation was about web fonts, design for the screen, and new forms of publishing. That’s what I spoke about myself, in a rambling talk full of questions and explorations (“all questions; no answers!”) about the problems and possibilities of designing books for a digital age. You won’t be surprised to hear that I embraced flexible design and adaptive layout as the best way to design any extended text for a variety of screens.

Everyone enjoyed New Orleans – the food, the music, the culture – though some attendees weren’t prepared for the binary contrast between the hot, steamy outdoors and the brutal air-conditioning in the hotel and in the bars and restaurants. The hotel was in the heart of the French Quarter, however, right on Bourbon Street; a fun place to be, but definitely also a tourist bubble. Bourbon Street seemed the least changed of any part of the city that I saw, since my one previous visit back in 1988 (also for a conference, also in the summer). I’m sure this is not only because the Quarter is on high ground and Katrina’s flood waters mostly didn’t reach that far.

I couldn’t, of course, make it to everything on the program; and as I didn’t arrive until Thursday afternoon, I wasn’t there for the pre-conference Education Forum or workshops. Presentations that stood out for me were Bill Berkson’s provocative “Great Readability Scandal”; Amelia Hugill-Fontenel’s well-crafted and artfully delivered “Artifacts All Around,” about some of the typographic curiosities in the Cary Collection at RIT; Otmar Hoefer’s affectionate tour of the collection of the Klingspor-Museum in Offenbach; Veronika Burian and José Scaglione on their joint type-making venture; and the “three guys in hats” (Scott Boms, Brian Warren, and Luke Dorny) on how designers use web fonts. Particularly notable was the presentation by three guys from the Cherokee Nation, about designing type for the Cherokee syllabary; this was a real-world application of type design that really matters. (“Every font that’s made makes your culture stronger.”) I also liked the tail end of Nick Sherman’s talk, filling in at the last minute for the absent David Berlow, though I missed much of Nick’s talk because I was too busy preparing for my own, which was up next. It was also fun hearing Matthew Carter, John Downer, and Akira Kobayashi do an onstage type crit of each other’s well-known typeface designs.

The heart of the event is always just meeting and talking with people, often at the evening social gatherings. Sometimes they were just a late-night party overlooking Bourbon Street, or an expedition to go “type busking” in Jackson Square in the hot summer night. TypeCon traditionally concludes with a special Sunday-evening event, after the close of the official programming; usually it’s something type-related, such as the visits to printing museums in Boston and Los Angeles, but this time it was pure tourist indulgence: a ride on the riverboat Natchez up and down the river, with music and drinks and commentary as we viewed the city and its environs from the middle of the Mississippi. The ship was by no means ours alone; we were just one among many groups aboard. But despite the cliché’d nature of the voyage, it proved to be a relaxing and enjoyable way to end a conference, and also to get a better sense of just where we were.

I got an even better idea on Tuesday, before catching an evening flight back to Seattle, when my friend Nevenah Smith, an artist who has lived in New Orleans for more than ten years, gave me a whirlwind tour of the city’s neighborhoods. It was great to get away from the Quarter and see something more down home. Even seeing parts of the devastated Lower Ninth Ward or the flooded-out sections near Lake Pontchartrain was a welcome reality check – and encouraging, when Nevenah pointed out to me the new houses being built there by volunteers for returning locals, and the people hanging out on their front porches the way they always used to. New Orleans has been devastated, especially the poorer neighborhoods, and its people treated shabbily. There’s no reason to expect that it won’t happen again; but there’s a resilience among those who’ve stayed or come back. I had prepared for this visit by watching Spike Lee’s powerful documentary When the Levees Broke and by reading Ned Sublette’s excellent book The World That Made New Orleans; I was trying to finish Ned’s more recent Year Before the Flood before I left for TypeCon, but I’m still reading it now at home. All of these gave me a little bit of insight into the context of the city I was visiting. (Even after the fact, I would recommend them to anyone who was in New Orleans for TypeCon.)

No venue was announced for next year’s TypeCon. Perhaps you’d like to put it on.

[Photos, top to bottom: what really goes on at a type conference (hint, hint); Ed Benguiat can’t escape his own typefaces; TypeCon attendees on the Natchez riverboat.]