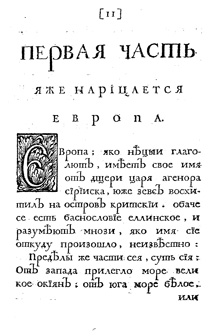 A little-noticed item was tucked into the goody bags handed out to members of the ATypI conference in St. Petersburg: a CD-ROM with a bright red label sporting the logo of the conference, plus titles, in Russian and English, saying: Первенцы гражданскйо печати / The first-borns of secular printing. The English subtitle explains it: Moscow editions 1708–1711. This little CD contains full scans of thirty-two books printed in Moscow in the very first years after Peter the Great’s drastic reform of the Russian alphabet.

“As they say in the supermarkets, an ‘unadvertised special’,” explained Maxim Zhukov on the ATypI members’ list. “A little gem hidden deep in the bag, just sitting there, waiting to be discovered.

“The idea of throwing into the ATypI’o8 goodie bag the CD-ROM prepared by Irina Fomenko and her friends of the Russian State Library (earlier known as Lenin Library) came very late in the game, two weeks before the conference opened. It turned out that (a) the ‘autorun’ thing only worked on IBM-compatibles, and (b) the introduction was in Russian. That was not surprising, given the usual target audience (domestic) of the RSL and its Rare Book Dept., and the OS most of the people in the world use (Windows). Translating, reformatting and reprogramming the CD-ROM would have taken forever, so we decided to offer the CD-ROM to the attendees of the SPb conference as is.”

The content is in Russian, but the images are wonderful no matter what language you read. And even if you’re viewing on a Mac and can’t take advantage of the “autorun” feature, it’s easy enough to just click on the links to the various PDFs, or open the PDFs directly, and browse through them. Among other things, this CD includes the complete printed specimen of the new Civil Type; we’re used to seeing an image of the first page, with Peter’s hand-scrawled corrections, but how many of us have seen the rest of the booklet? It’s here.

“Of course,” says Maxim, “the image resolution is not press quality. And yet, we never had it this good. For decades, all there was were the tenth-generation reproductions, heavily retouched, most of them coming from Abram Shitsgal books. And now… thirty-two Petrine books and other printed pieces scanned cover-to-cover! Isn’t that something.”

[Photos: top, interior spread from the first type specimen of the new Civil Type; below, a page from a 1710 book on geography, in the new type.]