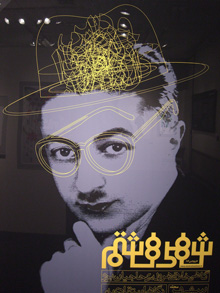 At Seattle’s Bumbershoot music and arts festival over Labor Day weekend, there was a remarkable exhibit: the Seattle–Tehran Poster Show. Curator Daniel R. Smith had gone to Tehran to investigate the graphic-design scene there, meeting as many local designers as he could, and he then put together this exhibition, which gives a parallax view of our two cultures. He paired each Iranian poster with one from Seattle, sometimes based on nothing more than a similar approach to letters or images or subject matter. Both cities have vibrant graphic-design communities, and both have created some wonderful posters.

The treatment of Arabic text is fascinating (that is, the Persian language, Farsi, which is written in the Arabic alphabet). Sometimes the letter forms are entirely deconstructed, given architectural or vegetal structure. When human faces or forms appear, they tend to be stylized, often intertwined with words. The Seattle posters, too, are interesting, but it’s clearly the work from Iran that grabs your attention. 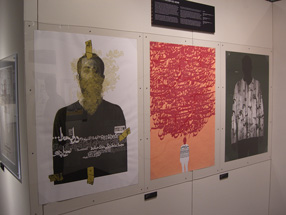 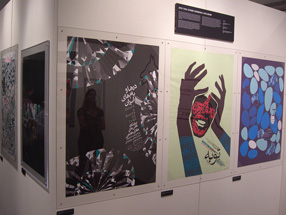 Bumbershoot only lasts over the holiday weekend, but a slightly different version of the show, called “Seattle–Tehran Poster Show Remix,” is up at the Design Commission in downtown Seattle until October 15. I intend to go down and check it out.