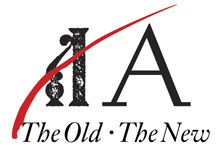 The Old · The New

We’ve finalized the dates for this year’s ATypI conference: September 17–21, in St. Petersburg, Russia. The conference theme, appropriately enough, is The Old · The New – appropriate because this is the new, ever-evolving Russia but it is also the 300th anniversary of the start of Peter the Great’s historic reform of Russian typography, when the progressive, authoritarian czar established (by fiat) a whole new style of typography for the Russian language. So there was a dramatic break between the old and the new three hundred years ago, here in Peter’s city; and today there are the ongoing effects of the political break begun nearly twenty years ago, plus the breakneck speed of technological change. It’s like wearing a pair of glasses where one eye sees the old, the other the new; but you’re constantly seeing through both at once.