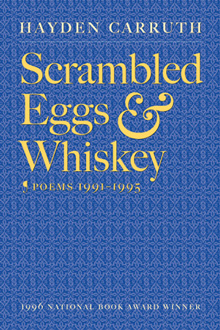 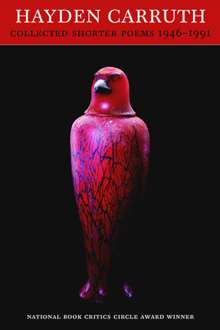 One of my favorite American poets, Hayden Carruth, died in September at the age of 87. I had the honor and the pleasure of designing two of his books, for Copper Canyon Press, as well as designing a new cover for a reissue of his Collected Shorter Poems. One of the new books I designed had the wonderfully evocative title quoted above (“It’s what we used to have for breakfast,” he said).

Recently, I finally got around to subscribing to the long-running magazine Poetry, and the first thing I read when my first issue arrived was not a poem but W.S. di Piero’s account of spending time with Hayden Carruth. Di Piero’s final anecdote, about Hayden going walkabout before a TV interview, particularly pleased me. I can’t claim to have known Hayden more than slightly, but I do recall an evening in New York City a few years ago when Michael Wiegers and I picked up Hayden at his hotel and took him downtown to the New School, where he was supposed to do a reading. He claimed it was going to be his last city reading (“I hate this place,” Mike remembers him saying), and perhaps it was; I haven’t checked.

The taxi we caught to take us downtown was driven by a classic New York cabbie, the kind of long-time driver who regaled us with tales of his encounters with savvy traffic cops over the years. (“But officer, there was no sign there telling me I couldn’t turn left.” “Sure, buddy, but you’ve been driving a long time; you know perfectly well that there used to be a sign there. I’m giving you a ticket.”) This character and his stories delighted Hayden.

At the New School, there was a noisy social gathering upstairs before the event, and after a while I noticed Hayden ducking out the fire door to the stairs. I figured I’d better follow him; I knew Mike had told me that he worried that Hayden would bolt. I found Hayden on the sidewalk out front, sitting on the curb and smoking a cigarette. I don’t smoke, but I joined him on the sidewalk, and we talked companionably for a while. When he was done with his cigarette, we just got up and took the elevator back up to the event, where Hayden gave his reading to great applause.