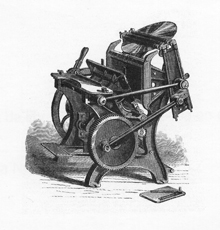 The other letters: women printers in Mexico

In Mexico City a couple of weeks ago, when we had lunch with members of the local type community in the café of the Palacio de Bellas Artes, I met Marina Garone, an Argentinian typographer who lives and works in Mexico. She told us about the exhibition and lecture series she had just organized, “Las otras letras: mujeres impresoras en el mundo del libro antiguo,” about the traditions and history of women printers, and how they embodied the “professional, intellectual and economic life of women.” The opening, which Eileen and I would dearly have loved to be able to attend, was to take place on March 8, in Puebla.

The lecture program is taking place this week, at the Lafragua Library and the Palafoxiana Library, which are co-hosting the events.

“With this exhibition we want to present an aspect of the history of books and printing which is practically unknown in the Iberoamerican world: prints in which the professional, intellectual and economic life of women is reflected. In this exhibition, a total of 63 works printed by Spanish, Mexican, Flemish, and French women, undertaken between the sixteenth and the nineteenth centuries, will be presented.”

When I asked Marina whether the exhibition would travel, she named a number of cities around Mexico and also in Spain where it was scheduled to be shown; and I hope it will come to the United States sometime as well. I think it should. Certainly I know many women printers in this country – and those who appreciate them – who would be glad to see it.