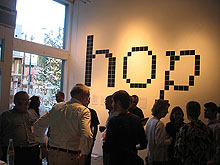 On Friday night of TypeCon2007, in Seattle last August, David Conrad hosted a party for TypeCon attendees at the Design Commission, his studio near the Smith Tower and Pioneer Square. The studio was festooned with artifacts of the various typeface design projects that Matthew Carter has been involved with for Microsoft: Verdana and Georgia, of course, but also earlier designs such as Elephant, and the most recent, the Latin-type (romaji) complement of the Japanese Windows typeface Meiryo. Projectors threw interactive typeface samples on the high white studio walls, and smaller screens along a lower wall offered excerpts from video interviews with the many people Matthew has worked with on his Microsoft projects. During the party, most people were busy talking or consuming the tasty munchies and the local wine and beer, but the informational mix they were moving through represented a significant part of the story of digital font development for the mass market.

At one point, I was standing with Tom Rickner, who has done the hinting on several of the fonts that Matthew has designed, and with Brian Kraimer, his colleague from Ascender Corp., when they started critiquing the gigantic white representation of bitmapped lettering on the front windows of the studio. “There’s an extra pixel in that cap-M,” said Tom. I looked; there was. I looked back at Tom. “Must be some bad hinting,” I said without cracking a smile.

This material is of particular interest to me right now, because I’m working on a new book in the “dot-font” series, a book about Matthew Carter’s type designs – how they came about, how they’ve been used, and the impact they’ve had in our visual culture. I’ll be watching those video interviews and mining them for anecdotes and insights. The purely digital typefaces leave fewer visible traces than old methods of type design: it’s all pixels. The hinting of screen fonts or the fine-tuning of outlines to take advantage of ClearType technology are recondite subjects, yet they have a clear impact on the type we see in the world around us. The interviews, the recollections of the people who’ve worked on these projects, ought to add a human dimension to this technical tale.

[Photo: Scene at the opening of the Matthew Carter exhibit, during TypeCon2007. Photo by Marina Chaccur.]